What fun it was to see fellow Dean Martin Show Alumni, Lainie Kazan on the ABC comedy hit, Modern Family. In the January 9, episode, Jay (Ed O’Neill) tries to plan a New Year’s Eve family get away for the adults at a hotel. Lainie guest stars as a hotel employee with an alter ego who befriends Jay. Imagine Jay’s surprise when he discovers Billy Dee Williams (playing himself) playing a poker game in the back room of that same hotel.

It was deja vu seeing Lainie and Billy together, since my sister, Maria Lauren and I spent some time with them not too long ago at a book and memorabilia show. We were signing our book, Beyond Our Wildest Dreams! Lee Hale, Dean Martin Show Musical Director, also attended “The Hollywood Show”. We had a lot to talk about with Lainie, who was a frequent and popular guest on the Dean Martin Television Show. It was like a family reunion; we had some crazy TV taping stories and memories to share together. Lainie was a delight.

Back to the show; my favorite part of the “New Year’s Eve” plot, is when Alex (Ariel Winter) and Haley (Sarah Hyland) team up together rather than doing their usual bickering and stay home to watch over the kids. Growing up with six sassy sisters, I can relate. Luke (Nolan Gould) wants to entertain a girl in his room and the angst Haley feels about keeping the situation from developing ends up making her realize she owes her mom “an apology”. Seeing Haley struggle with ‘walking a mile’ in her mom’s shoes is great!
Cameron (Eric Stonestreet) and Mitchell’s (JesseTyler Ferguson) adventures in trying to reconnect with the ‘party scene’ and feel young again were hilarious. 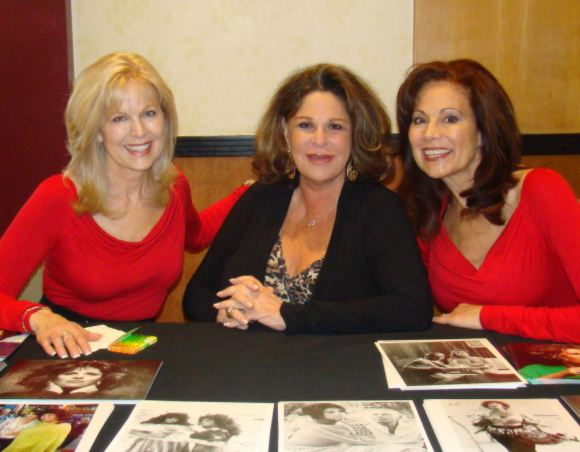 Starting out this new year Maria and I would like to wish you and your family & extended family all the best. We hope you enjoy making memories together, beyond your wildest dreams. May laughter abound!
~ Linda Alberici Eichberg